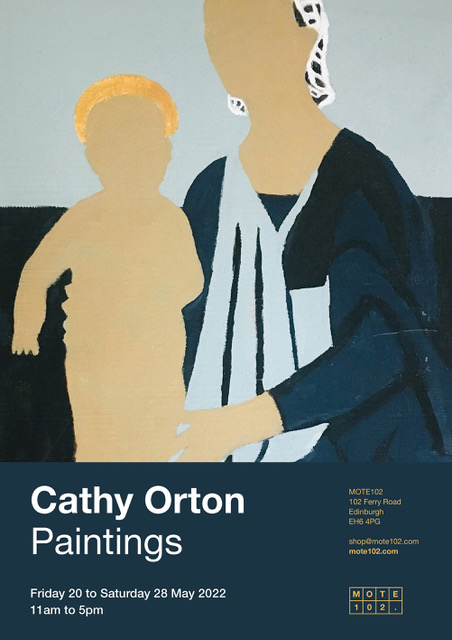 Cathy Orton is a painter who lives in Edinburgh. Studying at Duncan of Jordanstone College of Art in Dundee in the late seventies, she graduated and had three daughters. She lived in the countryside close to Edinburgh for a long time, making a garden, without a car. Fresh air and trees. She qualified and worked for a number of years as an art therapist and was inspired. During all of these times she has sketched and drawn and painted. For the past twelve years she’s had a studio in her house and it’s full of work. Her whole house, all rooms, all available walls, dance to her tunes. Whatever else was happening then and now, (she has grandchildren who enjoy taking up her time), she has made space for prolific production. Her daughters must have absorbed something of that performative air and atmosphere, all adventuring into becoming artists themselves. Katie, Sophie and Anna Orton have their own practices, also working collaboratively under the guiding name Ortonandon.

Her life is her painting. Her kitchen. Her people. Anything that grows in the plant world. Birds. Trees. She colours them with movement in a sculpted air. She painted the gate into her street when lockdown was lifted. Opening up. Her sketchbooks are large with confidence in the action of drawing. She paints a lot on cardboard these days. During lockdown, she had to purchase it in bulk to box up and send off work to people who had bought from far afield. Unexpectedly, the big leftover sheets became canvas

Once out there, Cathy’s work makes its own space, struts its stuff. Out there on its own. She doesn’t look back other than to rediscover the moment when it was made. She once asked friends and daughters to send her pictures of their torsos wearing only pants—a colourful, stripey, fun, loving series unfolded with serious intention. Cathy all over.

Thanks to Peter Amoore and Lara Macleod for introducing Cathy. And thanks to the pocket phone call that brought Cathy and I together again this year after that first meeting in 2019. We stalled in the getting to know each other for two years due to circumstances beyond our control. Well, we’re back in gear. A huge thanks to Thomas Aitchison for installing the show—his thought and care have been exceptional. And to Cathy  for being so generous with her work and words. To coincide with the exhibition, Peter and Lara published a pamphlet of three essays by Katy Hassall, Deborah Jackson and Jennie Temple that tells more about the warmth, courage, encouraging nature and colour of Cathy Orton.