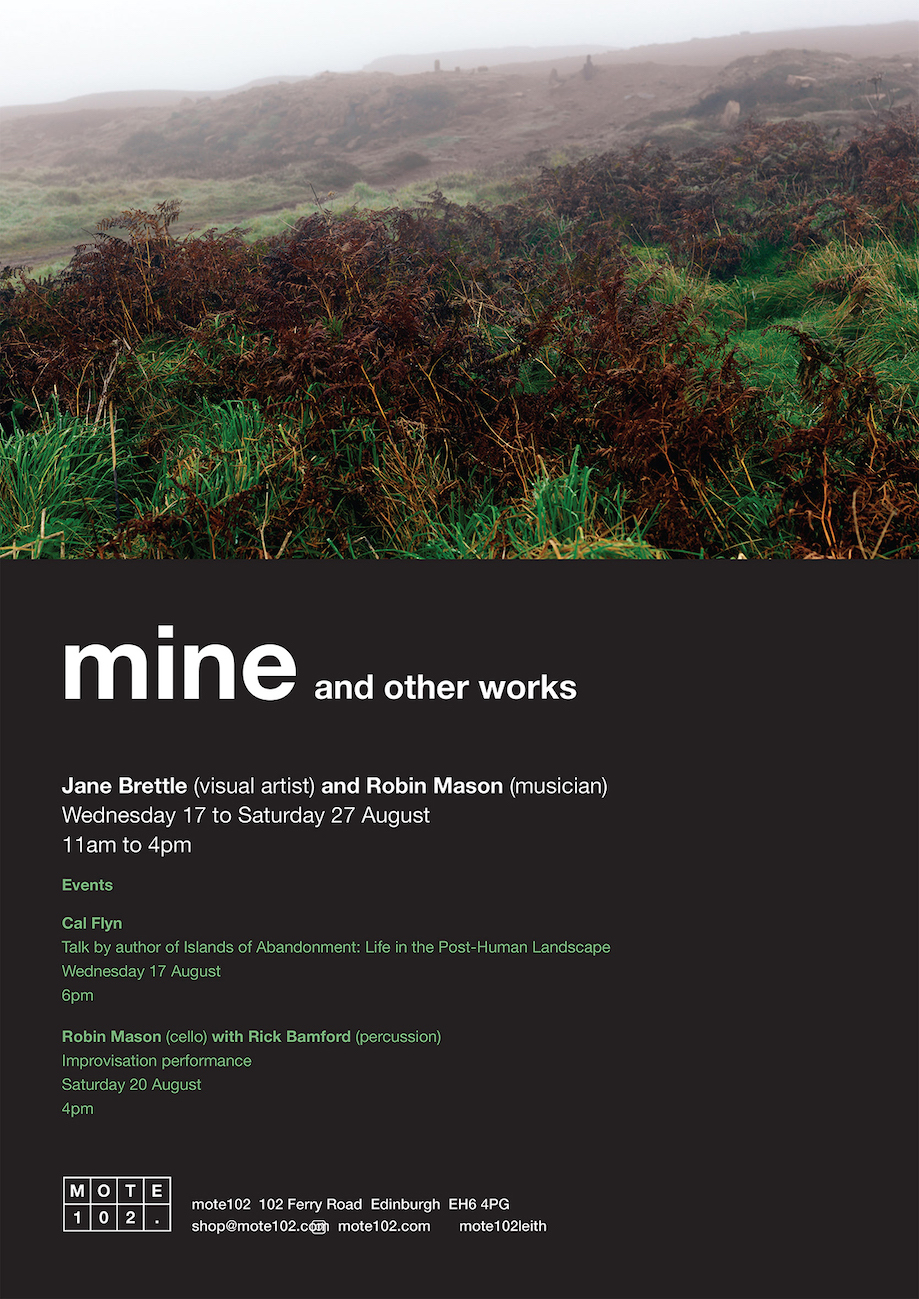 ‘mine’ is a work showing two films simultaneously. Moving across various histories—social, geographic and political—it has been developed by artist photographer Jane Brettle in relation to two specific locations—a coal mining area in Scotland’s East Lothian and a tin mining area in South West Cornwall.

The work views these once ravaged, but currently compelling, post-industrial landscapes with reference to their commercial histories and fragile future. The films are linked by a newly composed soundtrack by Robin Mason.

Walking in all weathers as the miners would have done. Framing the visual while researching both historic and current land management schemes which continue to exploit resources for profit—latterly the development of these sites as tourist and recreation and heritage locations where man-made ‘landscaping’ and a return to ‘nature’ now define these environments.

Investigating local museum, photographic, library, bookshop and online archives for information for records of the people who made a living through mining—talking with those who remember. Both sites have been mined for generations, flourishing at a similar time and abandoned with equal antagonism and bitterness. Communities of men, women and children operated the mines, and at the height of production experienced similar working lives.

Exploring immense natural forces. Tiny to very significant human effects. Attempting to evoke large chronological ‘spaces’. Improvising to the projected images in an industrial silo helped to conjure sonorities of ‘otherness’. The use of composed and improvised music and sound—a very permeable line separating the two.

Not all was anticipated: dropping a stone down a 1500ft vertical shaft in Cornwall and listening to the sounds emitted on its LONG journey to the bottom has proven a visceral and primary source of musical inspiration. Sharing walks/research and feedback/overviews on the positioning of musical sections had unexpected effect.

On 17 August, we were delighted to have a sell out audience for Cal Flyn in conversation with Jane Brettle.

In her much acclaimed non-fiction book Islands of Abandonment: Life in the Post-Human Landscape Flyn lyrically describes what remains behind after the humans have deserted a landscape. From Chernobyl to remote Scotland, from Soviet-era collective farms in Estonia to the mud-entombed town of Plymouth in Montserrat, Flyn’s description of the world’s dystopian sites of monumental destruction brings an unexpected optimism to this page-turning, best-selling volume.

On 20 August the shop also hosted Robin Mason (cello) and Rick Bamford (percussion) in an improvised performance which successfully tested our acoustics.